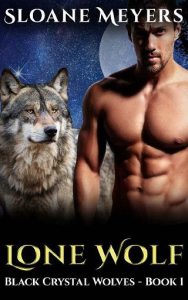 This lone wolf has never needed anyone. But one woman is about to change all that.
When wolf shifter Spencer Mack is all but kicked out of his clan for crossing the alpha, he’s not sad about it.
He never liked being bossed around, anyway.
He’s a rulebreaker. He’ll live on his own, with no one to answer to but himself. A true lone wolf.
But Spencer’s plan to isolate his heart goes haywire when Lori Massey crosses his path.
She’s the most beautiful, fascinating creature he’s ever met, and he has to have her. One look at her turns his inner wolf into a howling, desperate mess.
His heart tells him that she’s his fated mate, but his head says there must be some mistake.
He has no plans to settle down, especially not with a full human. She’ll never understand his secrets.
He does his best to avoid Lori, but their paths keep crossing. When he learns that her past harbors secrets, too, he knows he should run in the other direction.
But he can’t stop the burning need he has to claim her.
His inner beast will not be denied.
Will their secrets keep them apart? Or, after all these years of loneliness, is it possible that this stubborn wolf has finally found true mate love?