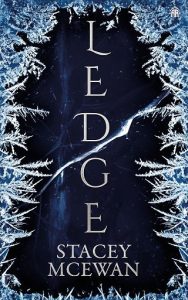 After being randomly selected as a human sacrifice, instead of death, Dawsyn finds herself on a quest to save her people from their icy prison…
—

In a place known as the Ledge, a civilization is trapped by a vast chasm and sheer mountain face. There is no way for anyone to escape the frozen wasteland without befalling a deathly drop. They know nothing of the outside world except that it is where the Glacians reside – mystical and vicious winged creatures who bring meagre rations in exchange for a periodic human sacrifice.
Dawsyn, ax wielder and only remaining member of her family, has so far avoided the annual culling, but her luck has run out. She is chosen and ripped from her icy home, the only world she knows. No one knows what will happen to her on the other side, least of all Dawsyn. Murdered? Enslaved? Worse?
Fortunately, a half-Glacian called Ryon offers to help them both escape, but how can she trust one of the very creatures that plagued her life? Dawsyn is a survivor, and she is not afraid to cut anyone down to live.
With a slow-burning romance, high stakes and even higher rewards, this richly created new fantasy series by popular TikToker Stacey McEwan will keep you gripped to the very end.