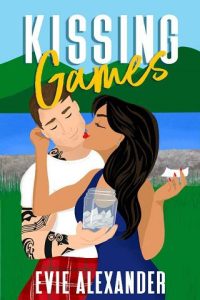 She might have made it to Hollywood, but he’s about to show her what she’s missed…

When actress Valentina Valverde arrives in Scotland to film Braveheart 2, she’s at breaking point. Driven by demons, she’s worked tirelessly since she was a teen. But she can’t stop now: everyone she loves depends on her. Yet despite all the glitz and glamor, Valentina can’t shake the feeling that she isn’t really living.
Bodyguard Charlie Hamilton’s lived too much. With looks and charm, he should have it all. But he’s broken. Estranged from his family, sacked from his job and with nothing left to lose, he flies to the Scottish Highlands to help his best friend protect Kinloch castle from a crazy Hollywood film crew.
But falling hard for a movie star isn’t in Charlie’s contract…
Thrown together on set, chemistry crackles between them. When Charlie suggests she take a holiday from life, Valentina is tempted to let down her guard and live a little. But as fun crosses the line into love, disaster bursts their bubble.
Can they let go of the past and find a future together? Or is this just a Highland fling?