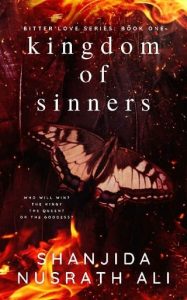 Once upon a time there was a kingdom ruled by a ruthless king. A Satan living and ruling his hell. Until came a queen who craved for her freedom. And a goddess who lived for the ultimate vengeance. Each one of them connected by a past buried deep within the graves of darkness. But fate had other plans, twisting their paths. Paths filled with betrayal, conspiracy, lust and power. Three of them fighting against one another, for their own obsession. Who will win? The king? The goddess? Or the queen?