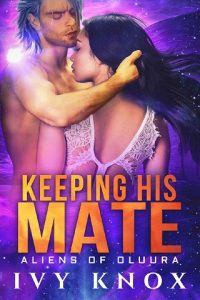 Bruvix thought rescuing an unconscious human female from a notorious slaver was the right thing to do…but that’s when his problems begin.

Stealing a med tube containing a human female outside the slaver’s brothel, Bruvix takes her back to Oluura, where he finds out the ring she wears means her heart belongs to another.
How can that be when he feels the tether connecting his soul to hers? How can his eternal mate be taken?
Eleanor Santos wakes for the third time since being abducted from Earth. The second time, she’d attacked the alien who touched her, thus getting herself shipped back in the white tube to her abductor. Now seeing human females, she knows she’s safe, but her heart cries out to the love of her life still on Earth.
Bruvix knows the deeps scars on his body from being attacked by a vicious beast years ago make him too ugly for his mate to look at, but he’s discovering that his inara is unique. She has a love of the wild, in more ways than one.
When the slaver who took Eleanor finds her on Oluura, his army comes to take her and the other females back. Bruvix comes face to face with his greatest fear—he can save either Eleanor or himself.
He almost died once, but this time his luck isn’t so good.

Keeping His Mate is the fourth installment in the Aliens of Oluura series, featuring a plus size, 31-year-old bisexual woman of color with a deep love of animals and a sunny, positive attitude. When she awakens on Oluura, a rugged, mysterious grump who is covered in scars catches her eye, and her life is forever changed.
If you like huge, sexy aliens, fated mates, steamy love scenes, and happily ever afters, you’ll love this series!