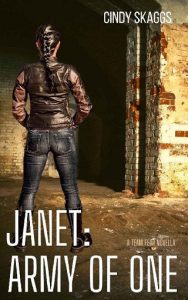 She will risk it all to protect the men of Team Fear from her biggest mistake.

JANET FOWLER trains others in hand-to-hand defense and firearms, but her knowledge of explosives is what she needs to combat ROGER AMES, the unscrupulous operative who manipulated and used her, leaving her a sixteen-year-old single mother. Now the son is a grown soldier with his own battles, but when Janet’s past with Ames intersects with her son’s mission, she will no longer stay in a support role.

DR. ADAM BRANSON took an oath to do no harm, but when Janet leaves their secure compound to correct the mistakes of her past, Branson must choose between protecting the woman he loves or obeying his oath and watching her die.