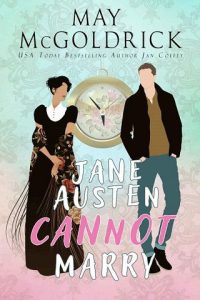 A comically offbeat, fish-out-of-water, time travel novel set in Regency England and the
21st century Colorado Rockies. Nadine Finley is a Scribe Guardian from the future who
must play ‘un-matchmaker’ to Jane Austen, a British naval officer, and the romance that
jeopardizes literary history.

Nadine has made the quantum commute to 1811 to stop Jane Austen from meeting and
marrying Captain Charles Gordon. The two of them share a romantic past, and if Nadine
fails in her mission, Jane will never get to London. The fledgling author will never get
her first book ready for publication. And if the novel is never readied for the presses,
Jane will never go back home and revise the manuscript that will eventually
become Pride and Prejudice. In short, disaster.

Except…matters become extremely complicated when the Scribe Guardian’s own
romantic interest unintentionally follows her across the centuries to 1811.
Xander Nouri is a tech millionaire who is cheerfully unfamiliar with both history and
literature. He has also forged a life where he is insulated from the non-quantifiable
uncertainties of feelings and romance. In fact, the only time he let his guard down was
for three wildly unexpected days in Las Vegas when he allowed his heart to be fondled
and then stomped on by an elusive woman named Nadine. Xander lives in a world of
reason, facts, and data…none of which explain her appearance, dressed in period
clothing, in a coffin a mile from his secluded mountain home.

And her claim of time traveling doesn’t exactly compute.

It’s not long before sparks once again begin to fly between the former lovers. But Nadine
needs to get back to her mission before literary history is permanently damaged.
By the time she’s able to make the quantum leap back in time, Jane Austen and the
captain have already met again…and romance is brewing. To complicate matters, Xander
has made the trip, as well. And Xander is the unlikeliest ‘nerd-out-of-water’ ever to land on Regency shores.

But that’s where the fun begins…