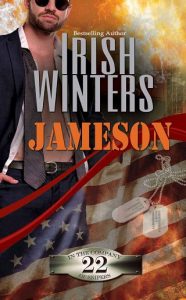 He wants his old life back…
Former US Navy SEAL Jameson Tenney hasn’t let the loss of sight keep him down. Although no longer active duty, he’s still able, more than capable, and determined to serve America. If only she’ll let him. If only someone will give him a chance. That’s all he wants. Enter Alex Stewart, current CEO and former badassed Marine. Jameson is barely hired, when he collides with the nation’s latest celebrity, reporter Lucy Shade. She’s determined to serve as well—herself. And she’ll burn the country down to prove it.

She wants a life of her own…
Protocol Office Maddie Bannister is late for work again. Worse, her ex-husband’s left town and left her holding the bag. But his loan sharks still want their money. This morning her car tires were flat. She’s running out of time. Sure she’s on the brink of losing the job she loves, Maddie charges into work and runs headlong into newly hired Agent Tenney. He’s as calm as she is frazzled. But he’s blind. Complete with white cane and dark glasses. What is Alex thinking?