Home
contemporary romance
Into the Flames by Jessica Ames (ePUB) 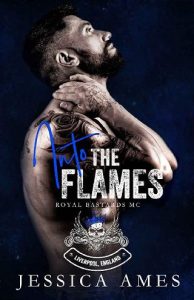 GENEVIEVE
I’ve never played by the rules. Women don’t run gangs, yet I’m the leader of the biggest one in Liverpool. No one knows I’ve stepped into my father’s shoes and that I’m making changes. Taking on the Royal Bastards MC is not a good idea, but I want the wealth and power they have. I want my family’s legacy to live on long after I’m gone. Doing that means making difficult decisions. I didn’t expect the Royal Bastards to retaliate so savagely.
Now, I’m prisoner of their President, a man who goes by the name of Mouth. He’s dangerous, vicious and he wants to make my father pay for crimes I’ve committed. Can I survive his wrath?

MOUTH
This prissy woman is a thorn in my side, but she’s the only way to exact my revenge. Crossing the Bastards is an instant death sentence, and when I’m done with Genevieve, her father is going to beg for mercy I won’t deliver. I’m not someone to cross without retribution and mine will be swift. I will destroy The Dockland Gang and every person associated with them, including Desmond’s pretty little daughter. She’s a doll I want play with and I will break her down piece by piece, because now that she’s in my control I’m never letting her go.