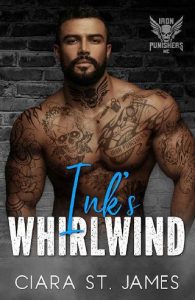 As Ink watched his president fall for a woman, he’s thrilled to realize that he’s sure he’s found his too. Even better news is the two women are best friends. Everything looks to be perfect. Or it does until Ink realizes Alisse isn’t willing to give him the time of day.
He’s spent months trying to get her to give him a chance. She keeps shooting him down with allegations of him being a man who can’t commit to one woman. She accuses him of only wanting conquests, not a real, lasting relationship.
Ink has had enough when he finds his woman has gone out on a date with another man. This leads to a confrontation followed by someone trying to take her at gunpoint. The club still has enemies out there. Is it them? Or is it someone else?
Meanwhile, Ink discovers that Alisse and he have a past he doesn’t recall. It answers a lot of questions and leads him to being able to convince her to give him a real chance.
Just as Alisse gives in to Ink’s pleas, his past walks back in the door. Alisse is afraid of what this means for them. A secret is revealed, and this causes only more worry and strife. Is it the truth or a lie?
Meanwhile, her life isn’t her own, as the club keeps her and her best friend under guard. As more dangerous things happen, the club is forced to consider that the enemy they were worried about might not be the enemy who is determined to take Alisse away from Ink.
Thankfully, the club isn’t willing to stop until they get the culprit, remove the threats, and get an answer to a mystery. All Ink is praying for is to be able to fully claim and love his Whirlwind forever.