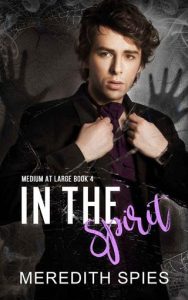 Things between Julian and Oscar are only getting better and stronger. They’re ready to take the next step in their relationship:
Going to the biggest paranormal investigation convention in the eastern United States to promote Bump in the Night.
Everything is changing.
And not in the way Julian hoped for when he took the job on Bump in the Night.
The show is falling apart before it even really gets off the ground.
Oscar is having a crisis of faith in his abilities.
Julian’s been seeing someone.
Someone who’s supposed to be dead.
And when did the Bump in the Night team get a devoted fanbase who likes to cosplay as them at conventions?
He’s still a skeptic, but there’s some things that Julian just can’t find an answer for these days.
Maybe that fall down the stairs during the last episode did more damage than Julian thought.
Everything is changing.
Oscar’s got a secret.
He’s not the medium he used to be. His abilities are getting unpredictable and people are starting to notice.
Worse, the ghosts are starting to notice, and some of them have made it their mission to make Oscar’s life as stressful as possible.
And there’s a man who might be able to help him figure out what’s going on. Too bad the man seems to want him dead.
But first, Oscar has to get through Boo Con and a surprising number of people wearing cravats who all want his autograph.