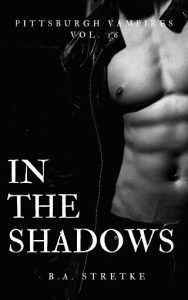 There’s something lurking in the shadows…

Dario Varga is a man on a mission. His friend’s brother has been found dead under mysterious circumstances, and he wants to know why. Arthur wasn’t the best person, he had myriad faults, but no one deserves to die that way. Dario is a man with special skills, and he never backs down when helping a friend. He’s drawn to Pittsburgh to find out the truth and find justice for his friend. This leads him to Pittsburgh’s most dangerous neighborhood and a leather bar called The Shadowlands. Dario doesn’t expect to find himself in the arms of the hottest vampire he’s ever seen, and he doesn’t expect to end up with a Vampire Coven drawn into his plans. Dario will have to make a choice. Is his independence worth losing a chance at love, and maybe his life?

Warrick Barrett has been called in from the field by Master Nikolas Hadden to handle security for the grand re-opening on the Imperial Club. After years of dealing with the Coven’s problems from one side of the world to the other, he’s happy to be back on home turf. While helping out with the interviews of Fortune Tellers for the opening night’s entertainment, he’s struck by the beauty and allure of one man in particular. Something about him speaks to Warrick’s soul. What Warrick doesn’t know is that this man will turn his life upside down, and he will be chasing him into the dark underbelly of Pittsburgh’s nightlife on the trail of a dangerous killer. How can he keep Dario safe without smothering the bond they are just starting to create?

Things are getting dark in Pittsburgh.