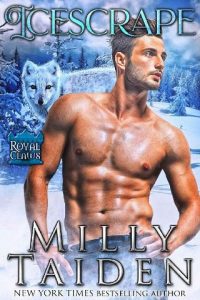 Bookish librarians are totally capable of finding missing people in the Alaskan wilderness. Said no one. Ever. So why is Grace Tumbler jetting off to do just that? She doesn’t know. All she has are books and a somewhat positive attitude that she can survive her first-ever trip away from home. That is, until her plane crashes…Sawyer Agnor, snow fox alpha shifter and mayor of Winterland, has one wish. Meet his mate. He knows she will be just as adventurous as him. Together, they’ll hike active volcanoes and make love in the rainforest. At least, that’s what he thought until Grace literally fell out of the sky. Fate sent him the wrong mate at exactly the wrong time.With Winterland in danger, Grace will have to decide if she’ll spend the rest of her life living through her books or if she’ll join in the fight. Sawyer soon realizes that having a bookish mate might have been a hell of a lot better for his sanity. Because of Grace’s new and sudden adventurous streak? He hates it as much as he loves it. These fated mates are in for a bumpy ride on their way to each other.