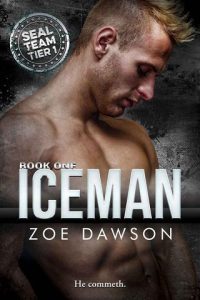 Master Chief Christopher “Iceman” Snow and his team are tasked with gathering intel on a terrorist group that is targeting American citizens overseas. They have hit several targets in Paris. It’s a tragic and volatile mission when he comes face-to-face with the tantalizing woman who has been heavy on his mind. He wonders how he can keep his hands off her to focus on the job at hand.

CIA Officer Rose Sinema is heading up the taskforce to root out the people responsible for murdering American citizens…this one hitting home. Gathering intel is her bread and butter, but a vital mission takes on a whole new meaning when Iceman and his team show up as part of the solution. She’s encountered him several times in the past six months, each fraught with a lot of chemistry. Her greatest worry is how she’s going to keep her mind off him and her hands to herself to focus on the lifesaving operation.