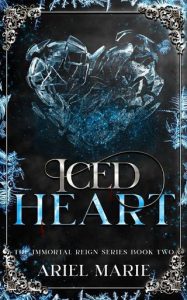 A vampire and a human with a strong attraction neither of them could resist.

Vampires won the war years ago, and everything on Earth had changed. Alima Morgan refused to watch her people bend to the will of vampires. She hated them for all of the destruction they had caused.
She was a rebel and would fight until there was no more breath left in her body.
But then her name was chosen in the draft. Apparently, she had been matched with a powerful vampire—the daughter of the king.
Against her will, she was shipped off to the princess.
Alima wasn’t afraid of the bloodsucker, and she sure as hell didn’t believe in destined mates.
Lethia Riskel wasn’t opposed to mating with a human. As a warden of the east, she needed someone at her side to rule. Her curiosity was piqued with one look at the human. She was stubborn, fiery, and would have to be tamed. Lethia was just the vampire for the challenge of breaking her new charge.
Thrust into a world of darkness and desire, Alima found herself falling for Lethia. As much as she tried to resist, she found herself craving Lethia’s touch, kiss, and even her bite.
With a war on the horizon, Lethia was a strong vampire who would protect her mate from the enemy, and prove they were meant to be.