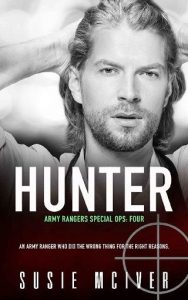 Hunter Armstrong sacrificed four years of his life for his mother. He knew her drinking contributed to the multiple injury accident she caused, and he couldn’t bear the thought of her going to prison. Even though, he and his friend had just started their rescue business, he told police he was to blame.
He knew the time wouldn’t be easy, but he never imagined his mother would repay him by leaving him to rot in a cell. When he was released, he knew there would be challenges ahead. Nothing prepared him for what he found in her apartment and his reaction to it.
Charlotte Cantrell was shocked to discover her uncle’s new wife hated her enough to hire someone to murder her, but that shock turns to horror when the would-be killer lets her live. What he did next was far worse than death.
She soon found herself on a boat filled with other terrified women and children. All are victims of human trafficking. When the gravity of what will happen to her finally hits her, Charlie is sure she won’t survive.
Luckily, Hunter and his team have been hired to rescue her but coming up against the cartel and their human smuggling business may be more difficult than any mission they’ve executed.
Will Hunter save Charlie and uncover who set the stage for this horrific turn of events?