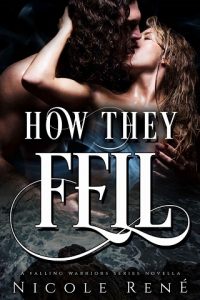 THEY LEARNED TO LOVE WITHIN CHAOS.

It seemed like forever ago that Leawyn was arranged to marry Xavier, the Chief of the Izayges and the most fearsome man in their history.

What started off as hate, turned into something far more powerful than either of them expected.

Together, they survived betrayal, jealousy and—eventually—war.

But now, the battle was over, and Leawyn and Xavier found themselves at a loss in the after effects.

CAN THEY LEARN TO LOVE WITHIN PEACE?

Xavier didn’t deserve Leawyn, or her love, but he had it and he’ll never let her go.

She sacrificed everything for him and he vowed to repay her in the only way he knew how.

He promised her forever.

She was the lightness in his dark world, but now…turmoil laid behind her eyes, and her light was dimming.

Leaving Xavier terrified that he couldn’t bring it back.

He promised to protect her.

He promised to fight for her…but how could he fight a ghost?