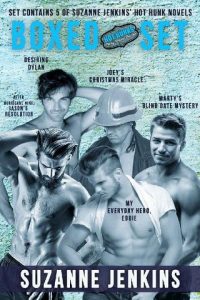 After Hurricane Nina – Jason’s Resolution
After his parents are killed, Jason Harrison, family icon, leads their business to success until his playboy reputation gets him banned. But it’s a blessing in disguise, when he takes the advice of a homeless man who just happens to have his father’s voice.

Joey’s Christmas Miracle
Finding Mrs. Right took Joey Saint longer than it took any of the other men in his firefighter family.
When he finally decided to let Candy Jones into his life, their picture perfect romance turned out to be the envy of everyone in their circle. One thing was missing however, and it would take a miracle to fulfill that dream.
Joey’s Christmas Miracle is a is a Saints of San Diego story.

Marty’s Blind Date Mystery
Firefighter Marty Saint is distracted due to a recent break up and lands in intensive care after making a wrong move fighting a fire.
He develops a mad crush on his pulmonary doctor who feels the same way. The chemistry is powerful between them, but she’s worried about their age difference and he’s worried he’s not good enough for her.

After his discharge, the family steps in to aid in his recovery, fixing him up with blind dates and introductions, all failures. He’s about ready to give up on love.
On the advice of his sister-in-law, Marty joins a pen pal site, Justcyberfriends dot com and a chance meeting with a kindred spirit mends his heart.
Marty’s Blind Date Mystery is a is a Saints of San Diego story.

My Everyday Hero – Eddie
Eddie is the guy in Four Girls and a Guy 🙂 He got his wish and matched with an internal medicine residency at UCLA Medical Center. But it means being away from Alison Saint for the first time in eight years of college and medical school.
On an assignment going into the homeless camps in LA to do medical treatments, he meets a young woman who will turn his life around just as he becomes her hero.
My Everyday Hero – Eddie is a Saints of San Diego story.

Enemies to Lovers – Desiring Dylan
When Landon was in love with Dylan, Dylan was in love with his surgical residency, in too deep to give her what she needed; a little attention, hope for a future.
So she walked away from it and into the arms of rock star Kenny.
A crazed fan murders Kenny and Dylan is the surgeon who is unable to save him. Landon’s fury finds an outlet and it’s against Dylan for failing to save Kenny. Dylan realizes what he lost when Landon walked out of his life may never be regained because of her anger.

Can Dylan give Landon the love she once craved so she can fall in love with him again? Or does a musician’s ghost have too powerful a hold on her?
Desiring Dylan is a Bittersweets story, set in Philadelphia.