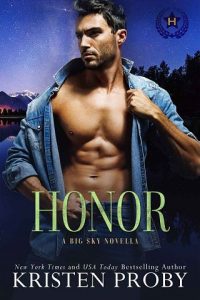 From the bestselling author Kristen Proby comes an all-new series of hot men in uniform in her beloved Big Sky Series! HEROES OF BIG SKY!

Nick loves his post as the princess’s security detail. Unfortunately, the bullet that ripped through his shoulder put a stop to pretty much everything in his life for a while, and his bosses have plans for him that don’t include sitting at headquarters with the other guards, drinking beer in his off-hours. They’ve assigned him a medical professional and banished him to the lake house for rehab. Which wouldn’t be so bad, but his new babysitter isn’t at all what he expected. She’s sin and temptation wrapped in the perfect package and infuriates him like no other.

Coming back home to Montana sounded like a dream to Jordan, and her new job is something she could do in her sleep. But then she meets her charge. Nick is stubborn, frustrating, and way too sexy. As a professional, she knows she should keep her distance, but he’s much too irresistible. And maybe it’s the magic of the holiday season, but he grows on her way faster than she ever thought possible.

When forced to imagine what life might be like without the other, Nick and Jordan quickly realize all they need is each other. Because it’s undeniable that they have it all—friendship, trust, loyalty, love. And yes, honor. The rest will fall into place.