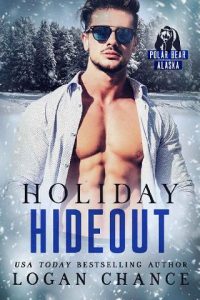 Every woman in the world hates me.
No seriously, it’s true.
When I decided to break up with my girlfriend, she went on to write a chart-topping album about how I broke her heart.
And everyone’s on her side.
I get hate mail.
Death threats.
Now, I’m hiding out until the filming of my next SharkQuake movie is underway.
I head to Alaska, to keep my head down until the buzz of Trinity’s new album dies down.
No interaction except for a housekeeper, Rachel, that shows up twice a week to clean.
When she shows up, I quickly learn she’s Team Trinity and probably wants me dead, too.
But there’s something about her I can’t quite ignore.
To top it off, she’s a major shark movie junkie– apparently it’s a thing.
Spending time with her makes me forget about the world.
And for someone like me that can be a dangerous thing.
This is only temporary, soon I’ll be heading back to Hollywood and leaving this holiday hideout behind.