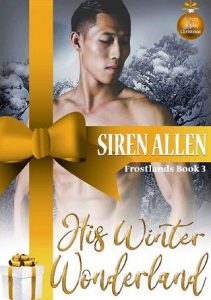 For some couples, it was love at first sight.
For Rhen Fujisaki and his mate, the love hasn’t happened yet. But the hate is strong.
He’s the leader of the vampire clan. His mate is the Goddess of War. They’ve both been banished to a frozen tundra called the Frostlands, where danger lurks around every corner. To survive, they’ll have to work together. But his mate would rather end his life than help save it.
Rhen knows he’s to blame for the hatred she feels for him. Yet, every attempt to prove that he loves her usually ends with her trying to kill him. Apologies don’t work on his mate. Neither do gifts. Since his love tactics aren’t swaying her, he’s going to focus on something he’s good at – war tactics.
This Christmas, he’s going to win the heart of his Goddess or die trying.