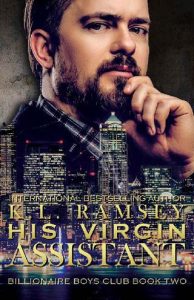 Rodrick McTavish didn’t have time for dating, even if his new sister-in-law insisted on fixing him up with her best friend, Evie. The last thing he needed was a girlfriend while he was trying to build his career. Taking a job at his brother’s law firm had him wanting to prove to everyone that he wasn’t there just because of his last name. He was a damn good lawyer and now was his time to prove that—not only to himself but his older brother. Dating Evie wasn’t on his to-do list but hiring her to be his new assistant was his best idea yet. Now, he’d just have to come clean to his brother and his new sister-in-law that their relationship was strictly a work one, even if his every instinct was screaming at him to take more from Evie.
Evie Jones had the worst dating luck ever. She went out on date after date, only to get to the third one, and have to tell the guy that she was saving herself for the right man. Yeah—announcing that she was a virgin was usually a death sentence to her blooming relationships. Evie was resolved to just give up when her best friend started bugging her to go on a blind date with Rod McTavish. She knew he was handsome, but she had other important things going on in her life—namely, finding a new job, but her pushy friend won out. Evie didn’t plan on her blind date leading to a job offer or turning into one hot mess of a lie, but it did. The question was, how would she and Rod find their way out of the disaster that they had created together?