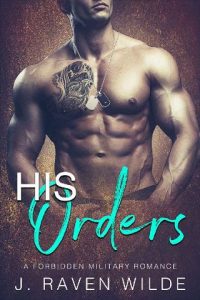 Sergeant Nicole Massey: All I wanted to do was ride out the last year of my enlistment and go back to being a civilian again. I had served four of my five years and was done with the never-ending dominant male authority in each command I served under. I had transferred to a new command where I caught the attention of my commanding officer, Colonel Riley Lang. Now, he had plans for how I should spend my last year, and I couldn’t say no as he had ordered me not to disobey him.
Colonel Riley Lang: I thought I was doing Sergeant Massey a favor by pulling her away from infantry and putting her on desk duty. She didn’t seem to be enjoying her time spent as a grunt and I needed someone to replace my secretary who had transferred. The moment she reported for duty, I knew I had made a mistake. I had never lusted over anyone under my command, but the way she fought to hold her tongue and hearing her call me sir stirred the dominant in me. She had a year left in her enlistment. I would make it a year she’d remember — especially if I ordered her to.