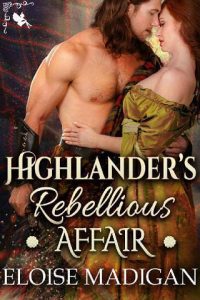 When Hope Burnett’s father parades her like a prize at an auction, her worst nightmare arises: a man twice her age, becoming her betrothed. But she won’t accept this, so she does the only logical thing: run away with a handsome stranger.
When Ian Cowan’s father died, his uncle usurped the Lairdship. His only goal is to gain his rightful position as Laird back. Now, on top of everything, he has to protect the woman his uncle wanted to marry…and maybe keep her for himself.
Now that he has her, Ian will let nobody harm Hope, no matter the cost. But things are not as simple as they look: an ancient treasure will solve all his problems, and it’s only a matter of time before his uncle finds it. And the key seems to be the only person who knew his father: a so-called witch…