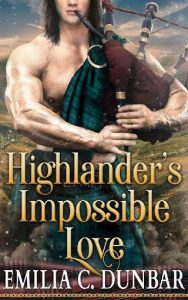 Being with him was unlikely but not impossible… until she became betrothed to another man.

Even though Annabel Chisholm is the daughter of a Laird, she has always hoped that she could marry out of love since she is not the firstborn. But after her sister’s tragic and unexpected death, Annabel’s father decides that she will now marry the man that was betrothed to her older sister!
Unable to comprehend what is going on, Annabel realizes that a few days after losing her sister, she is also going to lose the love of her life, Kenneth Canmore. Kenneth makes a living with his sword, and when he plays the bagpipes, few people can ignore a Highlander that embodies everything that the tales of bravery and courage have been singing about. He and Annabel have been loving each other silently but passionately, yet, he remains a peasant man and does not have the power of wealth to compete with his beloved’s new betrothed…

Annabel refuses to abandon Kenneth, but since he values her happiness more than his, he decides to go with her to ensure that her new life and husband will be everything she has dreamed of. After that, he will leave and never see her again… As things begin to look good in Annabel’s new life, Kenneth decides to go away, but a dark secret reveals itself and hits like a bolt of lightning.
Unfortunately, Kenneth’s desire to depart has disappointed Annabel and has shaken the trust between the two. Annabel is unsure whether Kenneth is making stories up to keep her close to him or telling the truth. But as Kenneth learns more, he is sure that Annabel is in dire danger and sees only one choice; with no one believing him, he is willing to risk everything to save the young lass’s life, even if that means losing his.

His only hope is that she will come to trust him soon, as, without her help, they are both doomed…