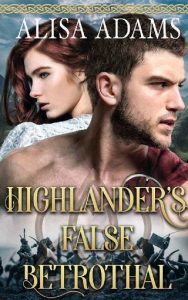 She is jealous of a man who is not hers.

Caroline Lloyd is the English daughter of Lord Lloyd, a sworn enemy of the Campbell Clan. All she has heard about the Campbells so far is that they are brute Highlanders and even more uncivilized than the rest of the Scottish, creating a constant problem for her father. However, as they gain power, the war against them becomes more and more costly, and there is only one solution; a marriage between Caroline and the clan’s leader, Laird Aodh Campbell.
The lass has always dreamed of marrying an English Lord, and having a Highland savage as her husband, seems to Caroline like she is sacrificing her life for her people. Indeed, as soon as she meets Aodh Campbell, all her suspicions are confirmed. Aodh looks nothing like a nobleman, and even though he is quite young and built like a warrior, his lack of manners will make living with him a nightmare.
The only good news is that the Laird seems to hate her as much as she hates him. After talking with him a bit more, she realizes that Aodh is unwilling to marry her, but at the same time, he wants the best for his people. The solution they come up with might be unlawful and dangerous, but they are both willing to take the risk; the two conspirators agree to fake their betrothal and wedding until the war between their people ends!
After their marriage, Caroline begins to see that Aodh is a lot more than the savage she had in mind, and the love he shows to his people moves her. However, an awful surprise awaits her as Caroline learns that Aodh was already betrothed to a Scottish lass! Their plan will go on, but the Laird still meets with his old betrothed, making Caroline feel miserable, and since this is a marriage of convenience, she can not complain to him at all…
Unfortunately, the secret of the false marriage will not remain hidden for long, and it is the perfect weapon in the hands of those who seek to destroy the couple. Now the two enemies must work together to undo the harm they created, but there is one burning question; after lying to everyone, how can they trust each other?