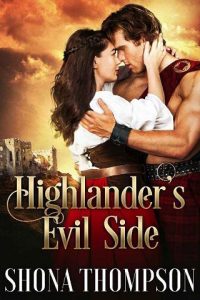 When Beitris learns that her father promised her hand to a Laird, she is devastated. She had decided to wait for the perfect love, but now, she has to marry a man she has never seen before.
Upon meeting her future husband, though, Beitris realizes they have met in the past. However, this is not possible if he was out of the country. Or is it?

Fraser MacClery didn’t want a bride. But upon returning to Scotland, his mother thrusts him into an arranged betrothal to a lass unknown to him. And when his future wife accuses him of kissing her without her consent, he is utterly baffled.
Despite his desire for Beitris, Fraser cannot go through with the marriage until he convinces her that he is not the scoundrel she thinks. But as if things are not complicated enough, he also has to face the frightened looks of his people, making him wonder what he has done wrong.

Who is the shadowy enemy that threatens his woman and his clan? And how can Fraser win when he doesn’t know who is a friend and a foe?
She was afraid of his kiss, yet his touch set her on fire…