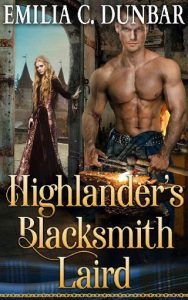 Getting his revenge comes with losing her.

There is nothing worse than being betrayed by your own, and Laird Niall Abernethy knows that well as it is his very uncle who overthrew him. With the help of an ally, his uncle took his lands and title and forced Niall to flee. After cutting his hair and beard and changing his name, the fallen Laird goes to a nearby village and tries to hide there as well as a man of his stature can.
Niall begins to work as a blacksmith but plots his revenge day and night. Filled with shame and guilt for leaving his people in the hands of his cruel uncle, as Niall pounds the iron with his hammer, he also pounds his soul, and he knows that until he finds redemption, he will not rest. However, when he meets a lass named Fiona, he is able to get revenge off of his mind, even for a few moments.
Fiona visited a store across the place Niall works in, and they both felt as if a bolt of lightning hit them. As beautiful and charming as Fiona is when Niall learns that she is the daughter of Laird Calder, the ally who helped his uncle overthrow him, he is appalled! Yet, after some calm thought, he realizes that he can actually use her to get close to her father.
Due to his strength and skill as a worker, Niall finds his way into the Calder castle, and he meets Fiona’s father. As she spends more time with her and they bond, plotting against her father becomes more and more difficult. As if the situation was not complex enough, Niall learns from her father that the lass is about to marry “Laird Abernethy,” his treacherous uncle!
Fiona did not deserve to be in this position, but Niall feels obliged to kill her new betrothed and free his people from the tyrant. But it is more than certain that if he does proceed with his plan, Fiona’s father would never marry her to the man who killed his ally. Niall must choose between redemption and the woman he loves, and he must do that fast, as his identity will not stay hidden for long.