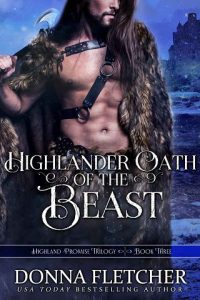 A promise is a promise, and Raven keeps hers, no matter the cost.

Five years ago, Raven of the Clan MacKinnon was forced to hide after the attack on her clan. She helped get her wounded father to safety, then watched helplessly as her two brothers were taken prisoner and marched off to serve the Beast, a heartless Northman determined to claim not only MacKinnon land but surrounding clan lands as well. What she witnessed that day shocked her. How she survived afterwards changed her forever.

Her brothers’ return home signals her own return home to her family and relative peace. Finally, the Beast has been appeased. Or so she thinks.

Wolf is an exceptional warrior, fearless, even ruthless when necessary. He intends to claim land that rightfully belongs to his family. All went according to plan until… how did one young lass escape a troop of warriors and ruin his well-executed plans? He searched five years for the MacKinnon lass without success, then she suddenly surfaces with a proposal for him that will end all strife and win him most of what he wants. She may think she is the victor, but he knows better. Or so he thinks.

Wolf accepts the proposal, signs the agreement, making the woman who caused him endless trouble… his wife.

Raven and Wolf face challenges, not only with each other, but with an old enemy seeking revenge, and unexpected secrets that reveal surprising truths and unforeseen danger.
Can foes become friends? Or will love decide for them?