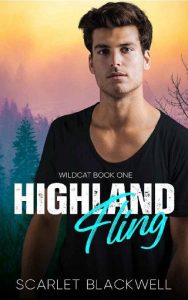 He’s one wildcat who needs to be tamed…

“The only moment you haven’t hated my guts the whole time we’ve been here, is when you had your tongue down my throat.”
“I hated you then too, I promise. Next time your tongue comes anywhere near mine, I’ll bite it off.”
Dexter Summerfield – B*stard. Washed-up American TV star adrift in the UK. So self-obsessed he should be on a reality show. And straight. Very, very straight.
Kade Macbeth – Philanthropist. Scottish cameraman. As reclusive as the wildcat he stalks. Out and proud.
Dexter Summerfield is given one last lifeline by his boss at Channel 7 after a string of negative publicity stories. Front a nature documentary in search of the elusive Scottish wildcat. Arriving in the Highlands in a blaze of self-righteous anger, he collides with an immoveable object in the form of his cameraman, Kade Macbeth.
Kade’s been in the business a long time and won’t take any bull from the notorious bad boy of British TV.
They clash bitterly from the start – opposites in every way – until a pivotal moment.
Dexter saves Kade’s life.
Suddenly, Dexter lets his guard down for the first time in his life and Kade glimpses the real man beneath the hard exterior.
As the time ticks down until they return to opposite ends of the country, things become confusing alone in the wilderness. Kade couldn’t be attracted to a man as unsuitable as Dexter, could he? And Dexter, who knows he’s not worthy of a second look from a man as fine as Kade, begins to question everything he thought he was so sure of…
“What I think is that no one has ever kissed you before like you should be kissed. And I’m about to change that.”