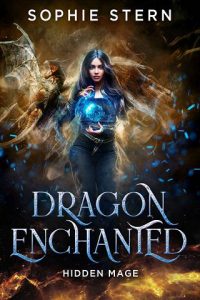 One mage. One dragon shifter. One fate.

Tabitha was destined to be great, but fate had other plans.
When her family is slaughtered by an evil witch who will stop at nothing to rule the world, Tabitha embarks on a journey to find the mage.

Tabitha has just one goal: to kill the woman who stole her destiny. Ursula may have taken her parents, and she may have taken her dreams, but Tabitha is going to take her life.In another sordid twist of fate, Tabitha finally manages to find the island where the witch is hiding, but now she has to travel through forgotten jungles, fight hidden beasts, and convince the devilishly handsome man guiding her that she’s not as terrible as she looks.

Felix is perhaps the most feral man Tabitha has ever met in her life, but he’s hiding something behind those fiery eyes, and she intends to find out what. Right after she kills the witch.