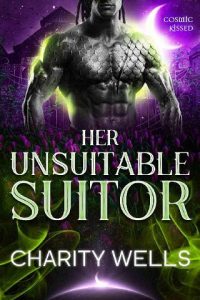 Scarred from years in an arena and banned from taking a mate of his own, Reynar has resigned himself to a lonely life guarding a pompous young ambassador. Bored with following the vain nobleman around as he’s wooed by a planet full of desperate females, Reynar is surprised to find his interest sparked by a fiery young female with the courage to stand up to the arrogant elitist and defend herself. He’s helplessly drawn to the woman who seems determined to avoid him despite how her body responds to his. Would she ever take a damaged male as her mate or will they be forced apart before they even have a chance?
Rowena
My job is easy; order supplies for the gardners, keep the flower arrangements fresh, program the bot that cuts the front lawn, balance the greenhouse budget, and stay out of the limelight; especially since I lied to get this job. That was bad, but what were the chances the alien visitors would come to this tiny little government owned estate? Suddenly, I find myself wrapped in the arms of a burly male after I’ve kicked the Saveet ambassador in the jewels. He deserved it, but that’s not the point. His bodyguard is bigger, stronger, and so much more enticing than I ever imagined a male could be. He’s also going to get me into trouble if I don’t keep away from him. So why do I keep ending up in the embrace of my unsuitable suitor?
Reynar
She’s feisty and fierce and oh-so-soft under my hands. I want this female more than I’ve wanted anything in my entire life. Her scent leads me all over the estate in a hunt for the spirited little human, though she’s forbidden to me. If she told me no, I might leave her alone, but that word never crosses her lips. No matter how many times she slips away from me, I’ll have her. But I have a job to do and when something threatens my charge, can I let love get in the way?