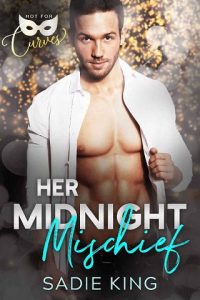 She’s home from college and stuck babysitting her little sister’s party; he’s the hot dad she’s crushed on since she was a teenager.
But when the clock strikes midnight, their lives will change forever.

Aimee:
I’ve got no idea how I ended up babysitting my little sister and twelve of her adolescent friends on New Year’s Eve.
But when her best friend’s dad turns up, the evening suddenly gets interesting.
While the kids are playing spin the bottle, we’re already on second base.
But he’s the father of my sister’s best friend. It could never work, could it?

Theo:
When I drop my daughter off at her first New Year’s Eve party, I don’t expect to meet the curvy Aimee. She’s the dedicated adult at an adolescent party and I can’t leave her alone with a bunch of thirteen year old’s.
But when my daughter catches us having a new year’s snog, she’s furious. I’ll do anything to protect my daughter from more heartache, but does that mean giving up the woman I love?