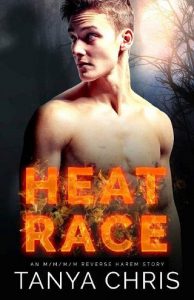 It’s been two hundred years since alphas could knot and omegas could get pregnant, since anyone has shifted. Today’s hybrids are more human than wolf, but there’s one tradition they’ve retained from their animal ancestry: the heat race. With omegas in short supply, the annual heat race is every alpha’s chance to catch and claim an omega.

Jack Henry stands at the starting line, undecided. He could conspire to be caught by his best friend and childhood sweetheart, Elias, but would Elias be alpha enough for him? Maybe he’d prefer to be claimed by Saul, the huge and handsome alpha he’s always had a crush on. Then Jasper shows up—a stranger dressed in leather who emits such strong alpha vibes Jack Henry is ready to give himself up before the race even begins. But Jasper’s an unknown entity, whose confidence might be indicative of a desire to control.

Jack Henry can’t decide, and so he runs, turning his fate over to fate itself as he’s pursued by all three of his suitors plus the one alpha he can’t abide—Lon, a violent and regressive man who won’t take no for an answer. Jack Henry is going to need more than one alpha to keep him safe. And to keep him satisfied.

During a long night of danger and triumph, the Treehouse Pack is formed. But beyond the heat race lies an uncertain future. Jack Henry, Elias, Saul, and Jasper might each face their own insecurities, fight their own fights, and find their place in the pack as they navigate uncharted waters together. Because it turns out that legendary abilities like knotting, shifting, and child bearing might be more than just relics of the past.