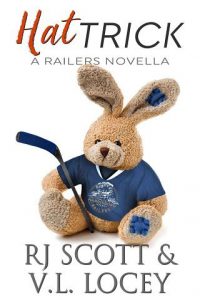 Stan Lyamin has seen many of his dreams come true. He’s found his soulmate, loves Noah like his own, hoisted the Cup, and has his Mama living with him in his new country. But his fantasies of a loud, loving, madcap home overflowing with childish laughter linger. When a distant family member passes, Stan and Erik immediately agree to take in the two orphaned children, but that means a trip back to Russia for Stan, an idea that both exhilarates and terrifies him.

Erik’s world tilts on its axis when a phone call wakes him and Stan in the middle of the night. Abruptly, Stan is returning to Russia, making deals, working with people who know people, and fully intending to bring two orphaned children home. The red tape is overwhelming, and Erik is alone in Harrisburg with the nearly impossible task of finding a nanny who can speak fluent Russian. Being on his own is one thing, but add in fears about Stan’s safety and team issues, and Erik is finding everything hard to balance; not least of which is spending quality time with Noah.

When their family expands from three to five, the journey won’t be easy, but love can always find a way.