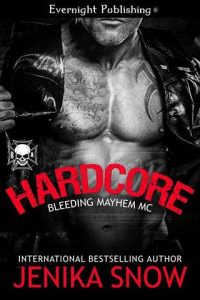 The Bleeding Mayhem MC, where blood, violence, and being a badass alpha reign supreme.

Claire left the Bleeding Mayhem MC two years ago after a Patch named Big broke her heart. But her brother, Mayhem, and the MC are all she has, and she knows she’s going to need the club’s protection after what she’s gotten herself into.

Big, who got his nickname because of the equipment he’s sporting between his legs, has never forgotten Claire, the woman he at one time had as his number one, so when she shows up at the club, he knows it’ll be hard to keep the past where it belongs. But Big still wants her in a bad way, and has no self-control when it comes to Claire.

Big takes it upon himself to handle Claire’s problem the only way he knows how—with violence. No way is he going to let her run from him again. She’ll be his in every way, no matter what.