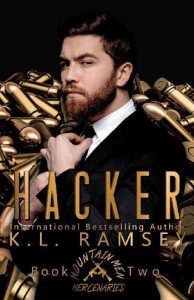 They wanted me dead and the only way that they could track me down was through a man that they called, “Hacker.” He was supposed to be one of the good guys, but to me, he was just an obstacle. I was good at hiding in plain sight and making myself disappear was easy. I was untraceable—at least that was what I thought until Hacker showed up on my doorstep claiming that he wanted to help me. Yeah—I didn’t believe a word the guy was saying but using him to get what I wanted was going to be fun. Bringing down my father’s data processing company was the end goal, and with Hacker unknowingly helping me, I’d reach that objective.
Bren Bristol wasn’t someone to be messed around with but that was all I wanted to do with the hot computer nerd. Her father had hired me to track her down after she disappeared and wiped herself from digital existence. She vowed to bring down Bristol Industries, one of the largest data processing companies in the world, and ultimately, her father. She was one of the best hackers that I’ve ever seen, but I was better. Finding her might prove difficult, but not impossible. I would find her and then, I’d offer to help her bring down her father’s company. It was the only way to earn her trust and if she ended up in my bed for a little fun on the side, that would be just fine with me.