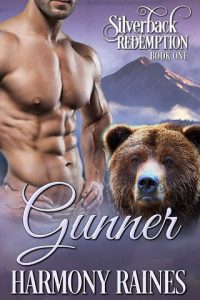 A bear in need of redemption. A mate in need of revenge.
Something called to Gunner. Something he could not describe. A need to go into the mountains.
He’d heeded the call even though he had no idea what he’d find. Certainly, he’d never expected to find his mate. Gunner had long stopped hoping she would walk into his life. Not that Sadie did walk into his life. She crawled, on all fours, determined to get down off the mountain and avenge the death of her friend.
But Gunner knew revenge led to ruin and death. Could he protect his mate from harm, even if that harm was self-inflicted?
They’d killed her friend and mentor.
Sadie couldn’t get the image of Professor Augustine, lying in a pool of his own blood, out of her head. No matter how dangerous it was she had to avenge his death and bring those responsible to justice.
But who could she trust?
Should she believe in the man—bear—who had found her in the mountains? Should she believe him when he calls her mate and tells her they are meant to be together forever?
It all seems impossible. Sadie had accepted she would always be alone. People confused her. They said one thing and meant another.
But when she was with Gunner, everything made sense.