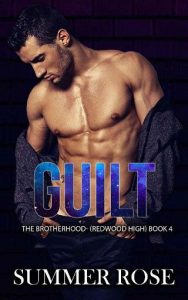 Did she kill him? No.
Was she involved in his death? Yes.
Katrina Dawson’s charmed life is coming to a grim end. Just when she thought everything was getting better after trying to cope with the events after her father’s death, she finds herself in a harrowing predicament once again.
These days, Kat has never felt more isolated, especially when consumed with guilt after being involved in Connor’s death. Now, she avoids Mason – her boyfriend and Connor’s twin brother – like the plague.
With her friend circle growing smaller by the day, Kat navigates a life without most of the people she used to rely on. What Kat doesn’t know is that things are only going to take a turn for the worst.
There’s an evil lurking in the shadows — one that only Kat sees. And it’s been following her every move, with a feverous intent to kill her.
What happens when she discovers that a man who once wanted her dead is back to uphold his deadly promise?