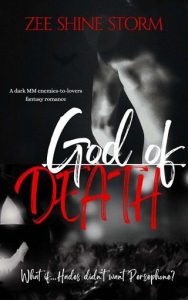 The last thing I expected when I threw that Halloween party at my place was to be abducted by some creepy dude who ruined my precious roses.
Warning bells went off in my head when he sought me out and cornered me, calling himself Hades and looking like he belonged in a satanic sex cult.
I was taken from my family and held captive in a realm called the underworld where all manner of demonic creatures worshipped this dark god. A powerful being who used me, terrorized me, and eventually…broke me. I’d never hated anyone more in my entire life.
And I’d never been more determined to kill anyone either.

He was such a pretty, feisty little thing. His tears brought me pleasure, his fear only excited me. And when he whimpered from the pain I inflicted? It was music to my ears.
I’d intended to toy with him and discard him once I was done. But then the truth about him shattered my entire existence.
’ . And I didn’t tell him because it would crush him more than I already had. Even if my silence meant I had to live without him for the rest of my cursed, immortal life.