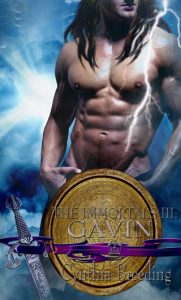 Used to losers in bars, a free-spirit woman finally meets the man of her dreams. Little does she know he’s a vampire who thirsts for her. The mangled corpse on a quiet Dallas street doesn’t stir medieval vampire Gavin Myle’s blood as much as the petite reporter with spiked, orange hair, trying to see around him, does. Chloe Whitney isn’t about to let a story get away from her, even if the black-haired, ebony-eyed hunk who looks like he stepped off the cover of a romance novel, tries to keep her off the scene. When she finally maneuvers around him and realizes the mutilated body was a friend of hers, she faints right into Gavin’s arms.

Forcing himself to ignore the warm blood pulsing through her throat, he takes a closer look at the victim. The man had not been murdered by a human, but by an animal with extremely large claws. A dragon, to be exact. The rumors of recent sightings of both a red and a white dragon had been true. The beasts unleashed when King Vortigern tried to build his castle centuries ago had been awakened once more. Which meant the evil god Balor, master of the white dragon, must be close at hand and likely seeking the Celtic relic that was Gavin’s to guard. So how did the zany reporter that he still held in his arms fit in? In his long life, the one thing constant was that there were no coincidences. What was the part she had to play in this horrific drama?