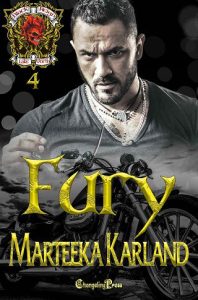 Noelle: I had dreams. Goals. That all changed when my baby brother suffered a traumatic brain injury. Now Jonas is my responsibility, and I can’t let him down, even if he’s his own worst enemy. I still have goals — I’m a fighter. As in MMA. Mixed Martial Arts. I want to be the best — fighting in the UFC. To be the best I need the best trainer. That’s Fury. The toughest man I’ve ever met. He doesn’t know it, but he’s also the man I’m in love with. But when Jonas gets in trouble, the only way I can save him is to go underground — illegal fights. I can’t tell Fury. He’d kill me himself. Or worse. Disown me. But I don’t have a choice. Jonas’ life is on the line. I have to fight. And I have to win. No matter the cost.

Fury: I spent seven years in the Army — the exact time it took to pay back my obligation for earning my medical degree free of half a million dollars in student loans. After that the Army and I both decided I might be better off putting my skills to use somewhere else. So now I put bikers back together for my club, Black Reign MC, and I’m damn good at what I do. I’m even better at taking them — and anyone else who gets in my way — apart.

Lately I’ve been passing those skills on the smartest, most street savvy kid I’ve ever trained. But Noelle is a kid — barely 21 — and I’m way too old for her. Now she’s gone and gotten herself in a boatload of trouble. If she tries to fight Shadow, he’s going to kill her. And if he throws the fight, our mission to close down these illegal fights will fall apart. Innocents will die. How do I choose one life over another? It was hard enough as a doctor in the field. Now it’s so much worse… because I did the stupidest thing I could have done — I went and fell in love.