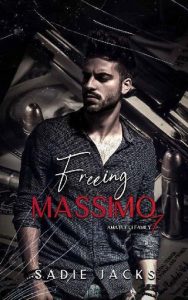 Can they free themselves from the shadows?

Massimo Amatucci is the Wraith. The lead enforcer for the Amatucci family. For years, his face has been the last his victims see before death takes them. Now that he’s been reunited with the daughter he recently discovered, Massi wants nothing more than to wash the blood from his hands. Permanently.
Known in the darkest circles as Shadow, Eden Forester’s cunning mind and steel nerves makes her the kind of assassin that others only whisper about in the dead of night. When she’s not trying to help Massimo with his daughter, she’s focused on trying to act like a normal woman.
But when enemies from their pasts strike too close to home, Eden and Massi will join together to end the threat against the family they’re creating together. And neither of them does things in half measures.
Will Massi and Eden be able to extinguish the darkness that hid their past sins? Or will the pitch black of their previous lives consume their present?