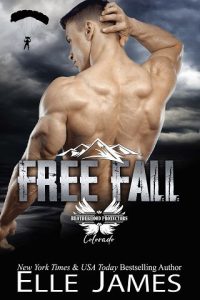 He pushes limits, tempting death…
Former Green Beret, Matteo “Tayo” Perez is a risk-taking adrenalin junky with a load of survivor’s guilt trying to find his way in a civilian world. He’s working in construction and moonlighting as a sky-diving instructor reluctant to accept a position with Brotherhood Protectors Colorado. Until he meets a pretty, homeless receptionist.

Kayla Quinn left Florida for Colorado Springs to start over after grieving the loss or her fiancé. After landing a job as a receptionist at the general aviation airport terminal, she starts dating a sexy sky-diving instructor. Just when Kayla is getting her life back on track, a cagy plane owner accepts delivery of several crates that make Kayla suspicious. Snooping into the contents of the crates, her life goes from on track to derailed in seconds.

She needs someone to save her from a fate worse than death…
When Kayla goes missing from her post, Tayo makes finding her his first mission as a Brotherhood Protector. He and his teammates join forces to find the missing woman. Their search leads to a private island paradise where Tayo and his team parachute in for the rescue. He and Kayla escape through the jungle, unable to deny their growing attraction, while fighting to stay alive.