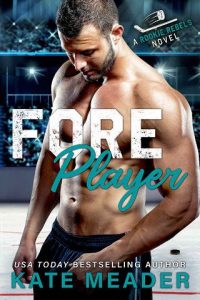 She’s got game everywhere but the bedroom. Enter the player who knows exactly how to grade her curves . . .
After a very public breakup and a viral post that declares him the villain, power forward Cal Foreman is taking a timeout from women and relationships to focus on hockey. When Chicago Rebels captain and old friend, Vadim Petrov, “volunteers” him to help train Vadim’s sister Mia, Cal figures he can do a favor for a pal and get ready for the season with his new team. But the imperious Russian would slice a skate blade through Cal’s internal organs if he knew what lessons Mia really wants.

Yeah, not that kind of stickhandling.
Hockey phenom and Olympics hopeful Mia Wallace needs help seducing the man of her dreams. That man is most definitely not Cal Foreman: notorious playboy, thorn in her side, and her brother’s bestie. But surely a guy with his reputed skill set has a few tips on how she can nail her target—which makes him the perfect foreplayer. Cal knows Mia sees him as merely the warm-up act in her grand plan to win another man, but as they spend more time together, he wonders if that’s enough. If they could be more. And if he could convince her he’s worthy of the starting line-up . . . in her heart?