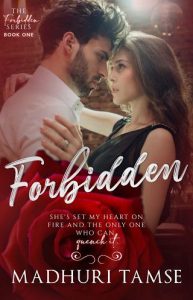 Jhanvi Sikand
I was supposed to marry my childhood friend, Mohit Raichand. Call it fate or destiny, I tied the knot with the Forbidden Heir of the Raichand family – Aarav Raichand, instead. I knew nothing about him except that he used me as a pawn to start a war to snatch from the Raichands what was legally his.

Aarav Raichand
Despite being the firstborn in the Raichand family, they forbade me from the rights and tags I should legally own. My father was secretly married to my mother, his middle-class lady love. Yet my egoistic grandmother got him re-married to another woman from her rich circle. She considers their offspring, Mohit Raichand, as the true heir of the family now. I would have ignored it all had her actions not taken my mother’s life. I pledged on my mother’s grave to crush the ego of my grandmother and snatch what is rightfully mine, including the woman she was getting Mohit married to.

A Fight for dominance altered to War for Love. One war, Three Lives, Only Two could survive.