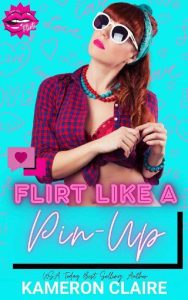 What happens when the office assistant / pin-up model flirts her way into the VP / playboy’s heart?
Camden Manning knows what and who he wants—a lifetime with the office wildcat who dresses like the star character on the set of Mad Men. Everything about her captivates him, and he’s been infatuated since he got a small taste at the Christmas party nearly eight months ago. She refuses to date him, and considering he’s number two in the company that bears his last name, he can’t really fault her.
Still—he’s not exactly her boss, so what does it matter if they walk the same hallways during the day? That only makes fooling around in the paper supply closet that much easier. Right?
One way or another, he has to convince her this isn’t simply lust, but how does he get through to her when she won’t talk, much less look at him?
Margot Talbot dresses like a 50s pin-up model and has the confidence to match—or so everyone thinks. Underneath the makeup, victory rolls, and rockabilly dresses, is a woman sure she’s the girl every man wants to f^ck, but no one wants to marry—just like her mother said she was. When the second most eligible bachelor in Spring City comes on to her at the office Christmas party, she lets her fantasies run away with her common sense—but only long enough for a few stolen kisses and smudged red lipstick.
He’s made it clear that wasn’t enough for him, but the man is too hot, too sexy, and too rich to want the more that he promises. Right?
When the CEO leaves with his executive admin for their honeymoon, Camden takes over the company and hand picks his temporary assistant—her. There goes avoiding eye contact and conversation. Can she resist the one man who turns her insides into molten goo every time he looks her way?
Does she want to?