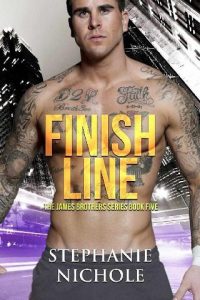 Jovi James has always been different from his brothers but he still craved the speed of a car just like they did. Jovi makes the decision to join the Marines right before high school graduation. No one knew the real reasons behind his decision but they supported him. On his last night in town he bumps into Summer Beckham, new to the area country girl. That night changed them both forever.
Tragedy struck Jovi while in the Marines, leaving him tainted and surrounded in darkness. He’s desperate to keep the darkness and memories at bay but when he fails it becomes clear to everyone Jovi has more issues than they expected. Jovi needs a ray of light to guide him but will he accept that Summer might just be that ray of light?
Summer Beckham has tragedy of her own. Tragedy she doesn’t want to talk about. Meeting Jovi by chance gave her the first flicker of hope but it was ripped away when he cut ties. Now, four and half years later he’s back. She tries to hold on to the hurt and the anger but the pull towards Jovi is too much.
Will Summer be able to save Jovi from his own personal hell or will she have to let him go? If Jovi allows the light back in will it last?