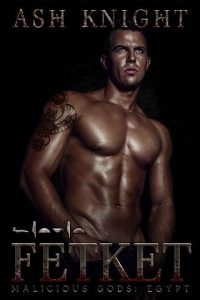 What if the person you owe your life to literally wants it in return for saving you?

In Egyptian mythology, Ra was the Sun God. After millions of rotations of the Earth, generations have come and gone, but the lineage of Ra still reigns. The Egyptian Mafia rules Chicago under his command. He’s more powerful now than ever, since he’s united with his rightful butler, Fetket.
Simon was a typical teenager until his parents kicked him out for being gay. When his uncle Ra showed him his destiny and calling, he stepped up to reign as Fetket. In a world unknown to him, he fights the demons of his past, his legacy, and those who honor a God who kills in the name of a long forgotten myth.
How long can he stay on the side of evil, knowing that there is more good in him fighting to get out? Will he let his family legacy control him, or will he finally break the chains and let love set him free?