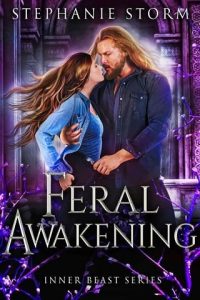 A surly drifter who refuses to listen — A feisty outcast who demands to be heard — A simple kidnapping gone wrong.

One minute Kat’s the black sheep of Eternal Falls, the next she’s Miss Popular, hunted by creatures she’s seen in nightmares. Bonus, the beast who kidnaps her, claims she’s one of them. Idiot. Kat doesn’t have time for delusional mountain men with her best friend missing. Guess she’ll just have to teach the bastards hunting her, she’s no delicate flower.
Accused of murder, Ronan cut a deal and abandoned his pack. He believed he’d left his old life behind until he accepts a contract to track a lost pureblood. Now, every secret he uncovers drags him in deeper. With moon-madness stalking him, there’s little time to correct the mistakes he’s made. Regardless, he intends to keep his promises, no matter the cost.

When buried secrets resurface, Ronan and Kat must fight the demons of their past in order to reclaim what they’ve lost.
What would you sacrifice to protect the ones you love?